The Witch of Besov 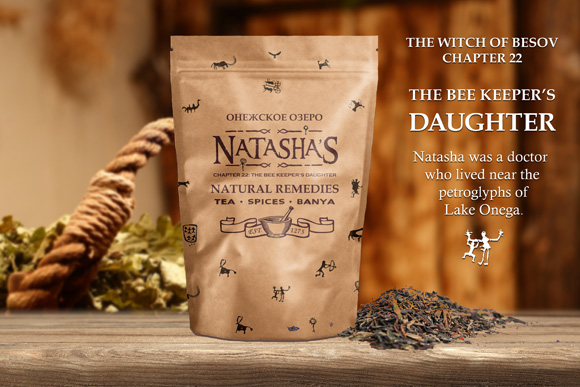 In chapter 22 of The Bee Keeper’s Daughter, we meet Natasha, referred to as a witch but in modern times she would have been a pharmacist. While her character is fictional, there are actual petroglyphs on Lake Onega, Russia, in the city called Besov Nas. The tea package in the photo is adorned with the images from real Russian glyphs in Besov and across the Siberian landscape further East.

Natasha is an intriguing character because she deals with the conflict of the time, where medicine and witchcraft were often confused and condemned. Her naturalist methods cure Vladimir, the ship’s quartermaster, and introduce Maria to the idea of healing through nature. Natasha, formerly Natalya, makes an impact on Maria that is felt later in the story. Readers may notice she asks for amber as payment during their departure. Amber is common in the Baltic, where they are going, and has many healing properties.

Another popular Russian custom is presented in this chapter, the ‘Banya’ or steam room. This is an extremely popular activity both in the country and cities of Eastern Europe. Families, colleagues, and friends will gather to sweat out the impurities in the body while slapping themselves with leafy branches from a birch tree. (Occasionally there is some alcohol involved.)

We thought it would be fun to include Natasha in Besov in the merchandise program and opted for an herbal tea that will be packaged as if you bought it up from her cabin, in 1290AD. The tea along with many other ‘brought to life’ items will be announced on the official website of the Bee Keeper’s Daughter when they are available. To learn more about the story and how the Witch of Besov connects with the characters, download your copy of The Bee Keeper’s Daughter from your choice of online stores including Amazon, Nook, iBooks, Ozon, Litres, XinXii, Kobo and Google Play.