We are delighted to announce The trailer for The Bee Keeper’s Daughter was officially selected and won a Gold Award at the 2017 LA Neo Noir Novel, Film & Script Festival.

About the Romance Novel

The Bee Keeper’s Daughter by Shiån Serei
The story begins with a young Russian peasant named Maria. Through a series of tragic events, she must travel North on the Volga river to find safety with relatives in a distant city. Along the way she discovers romance, adventure, friendship and the beginnings of her womanhood. 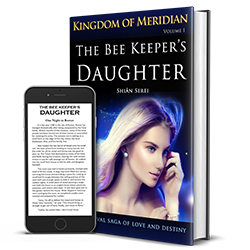 The world beyond Maria’s simple farm life in Rostov is fraught with peril. She must evade determined soldiers, seeking her capture while daring to trust complete strangers for help. Travel with Maria as she uses every skill acquired in her childhood and every lesson learned from her Mother, the town school teacher. Be there when her eyes are opened to the ways of the world, learning everything in a hurried pace of danger, intrigue and excitement.

The story unfolds within the backdrop of Russian history and folklore. Maria’s story will wrap you in a world of sensory imagination that takes you away in the first chapter and holds you till the last word is read. Only to discover the story of Maria is far greater than ever imagined, she is a legend in the making, guided to her destiny.

The Beekeepers Daughter is volume one of five in the medieval saga, The Kingdom of Meridian.